Watching the national championship college football game earlier this month (for my international readers, that’s American football, not soccer), I saw a great example of the need for clear roles and responsibilities among decision makers.

Football, perhaps more than any other, is a sport where complex relationships require clear roles and responsibilities.  11 offensive players line up against 11 defensive players.  On each play, several players may call out plays.  Key players have responsibilities to read what is going on and then shout instructions.  From a fan’s perspective, it seems to go pretty well and it’s fun to watch players adjust based on calls from the quarterback, the center, or the middle linebacker.  But, sometimes it doesn’t go well. 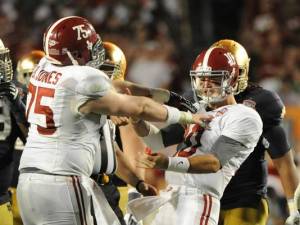 Alabama was leading Notre Dame 42 to 14 near the end of the game. You’d think the Alabama players would be relaxed.  Alabama had the ball, lined up, and quarterback and the center started calling signals.  The quarterback was suddenly very annoyed.  He stood up and jumped around behind the line yelling instructions.  He was angry.  The players looked confused.  The result was a delay of game penalty. The center stood up, the quarterback screamed something in his face, and the center gave his quarterback a shove.  All this from a team with an insurmountable lead about to win the national championship.  The TV commentators, shaking off their surprise, explained that the coach and quarterback were both known for being intense perfectionists.  Clearly, it paid off in their performance.  Just as clearly, we can note that a team striving for high performance can suffer if the leaders get confused about their roles and responsibilities.

This example made me think about teams I’ve observed where the leaders were out of sync.  It had an impact on the team’s performance.  One leader’s goals may be different than another’s.  One leader may believe she has authority to set direction while another doesn’t agree.  Or, maybe no one makes a call that someone should be responsible to make.  The results can resemble the shoving match from the Alabama game.  Or, worse, nothing happens and the leaders descend into a progress-resisting stew.

At the Alabama game, the players went to the sidelines, yelled at one another, sorted out the problem, and then made up.  Within a few minutes hugs and posterior slaps signaled a renewed bro-mance and behavior more suited to champions in the making.

If only getting to bro-mance on our projects were so easy.  We seldom shout it out if someone makes a call they shouldn’t.  If we do, we don’t make up as easily.  More often people clam up or passively resist in other ways.  Issues persist and multiply.

One thing that helps avoid this is if we appoint a single leader who can and will make decisions that keep things moving.  The leader has to be firmly rooted in meeting business objectives while being savvy about technology considerations.  If one with these characteristics doesn’t exist, then maybe leadership is shared.  Sharing is not a bad thing provided each leader knows when they get to call the play.  Each leader understands that their call is made in context with the calls that need to be made by others.  One leader safeguards business interests (the quarterback).  Another may call out technology considerations (the center).  A third may defend against excessive risk (the middle linebacker).

This sports analogy may be a stretch.  It must be football withdrawal now that all my teams are done for the season.  But, I hope I’ve made the point that time spent early in the project defining leadership roles and responsibilities and a decision making process will avoid personal fouls and excessive timeouts.  I’m not alone in thinking about football analogies.  In an address at the National War College on December 19, 1952, President Harry Truman said, “You know, it’s easy for the Monday morning quarterback to say what the coach should have done after the game is over.  But when the decision is up before you — and on my desk I have a motto which says ‘The Buck Stops Here’ — the decision has to be made.”  It was clear to President Truman how decisions got made.

Decisions happen effectively when the deciders know what they get to decide about, make decisions when needed, and air differences when they happen.  If it’s not happening like that on your project, call a penalty.

Copyright 2013 Glenn Briskin and “The Other Side of Risk”