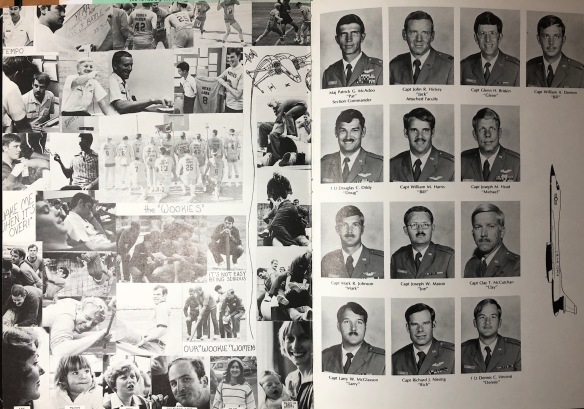 Pat McAdoo was the leader of our flight in Squadron Officers School (SOS) in 1977 when I was an Air Force officer.  I think that my three months at SOS were my best three months ever in some ways.  Marcia gave birth to our son.  I was busy from early to late with 11 other people trying to get through the same challenges.  We were expected to learn and grow and commit to one another.  We did sports and PT every day.

Major McAdoo was (probably still is) a fiery little fighter pilot sort of guy.  Fighter pilots tended to be like that because they had to be tough, brave, and fit into a small space.  Pat was also a scholar and really embraced the leadership and management learning he wanted to impart to us.  The thing I remember most vividly was about how we should focus on what can go right.

Our flight had many virtues, but sports wasn’t one of them.  The 78 SOS flights in a class at Maxwell AFB in Montgomery, Alabama all competed in 3 sports – soccer, volleyball, and flickerball.  Volleyball was played per standard rules.  Soccer was modified to take out headers.  Flickerball was a mash-up of basketball, football, rugby, and maybe some other games.

We played 3 matches of each sport.  One each Friday.  Nine in all.  We finished the class about 4 wins and 5 losses.  Our first four Friday Night Lights were losses.  3 soccer games and one volleyball game.  At volleyball game 2, we finally played well enough to win.  Maybe the other team wasn’t very good, but we felt great.  During the yelling and celebrating at the end, something different happened.  After each loss, Major Pat, always an active player on the team, would ask “What can we do better?”  We’d think of things and work on them at practice.  In the midst of our celebration after the long delayed win, one of our more with it guys yelled “What can we do better?”  We started to blurt stuff out.  Pat stopped us.  He said “Wrong question.  Ask your self ‘What did we do right?’ Knowing what you did right is more important than knowing what you did wrong.”

So, that stuck with me and has always proved true.  Understand and reinforce what can go right.

P.S.  While all this fun learning and struggle was going on, my amazing (pregnant) wife was living with me in Montgomery in late fall in a single wide trailer in a park with 300 other single wide trailers exactly the same.  We had 300 pounds of our regular stuff with the rest in transit from overseas to the Pacific Northwest.  She helped me, read about Lamaze in a book, showed up at all our games, and was the calm one at the birth of our son.  What a woman!  The things we do for love.  Thanks, Marcia.

I’ve been semi-retired for six months and turned 67 this week.  Why am I thinking I need to start-up this blog again?

I left it behind because everyday I’d hear or see something that would make me think “blog post!”.  It was like when I was a photographer for the school paper and yearbook.  Everything was about the photo, not being in the action.  So I stopped carrying a camera everywhere.  With writing, if you are writing you have your camera (brain) wherever you go.  So, I stopped writing.

But I’m starting to think that writing about stuff made me think more deeply about what I was experiencing.  Now, I think “That’s a good or useful thought” and I forget it 5 minutes later.  Kind of like “I’m going to look that up” and then when you sit down to do a search you forget what it was you were going to search.  Sigh.

I read a book from a Google scientist Tan called Search Inside Yourself about being mindful.  Maybe writing is a form of meditation.  You are mostly just thinking about what you are writing and other stuff can wait.

I still work part time helping people with their projects.  Part of me wants to always do that.  It’s the hobby that I’m best at.  But, there are other things to do, too and I’m not great at balancing things out.  Part time grows into a full time obsession.  So, will writing this blog help with that?

My last job was less about project management and more about strategic planning.  Strategic technology planning.  How we apply our money to technology in the ways that get the best results for the organization.  I think I came up with some pretty good ideas.  They were rooted in ideas that evolved over years and were somewhat captured in this blog.  I’d like to write more about strategic planning, technology roadmaps, portfolio management, etc.

So, I guess I’ve restarted.  Let’s see where it goes.